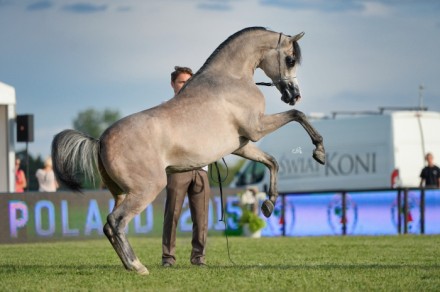 The young, promising stallion Genetrix is a son of one of the best Monogramm daughters - the dark bay Gwarka, and of the multichampion Shanghai E.A. (owned by Ajman Stud). Gwarka is also the dam of two fillies successfully sold at the Pride of Poland auction: Garuna by Grafik and Gataka by Ekstern; and of the stallion Good Boy who is a very good sire already. Genetrix can be proud of his outstanding show career. As a two year old he was shown four times and four times he was awarded with medals or high places. Source: polskiearaby.com