All Nations Cup 2019 - the Breeders' Cup for Poland

One silver and two bronzes, special trophy for the best European horse of private breeding and the Breeders’ Cup – Poland takes a fairly big slice from the All Nations Cup 2019 cake.

Yearling fillies
There were four Polish fillies in the show ring, of which the best performance was delivered by Janów’s AMIRATA (EKS Alihandro – Alhasa/Ganges). With a score of 91,08 she placed third and qualified for the championship.


ALSA - the highest-scored mare of the show. Photo: Sylwia Iłenda

In the class, LISSAR lost only to SHANGHAI EA. Photo: Sylwia Iłenda

Championships
In the Senior Mares Championship 8 out of 10 participants were bred in Poland – therefore medal chances were high. Similar to the class results, ALSA was chosen Reserve Champion Senior Mare, while WILDONA received the bronze medal. On the top of that, EL EMANDO (QR Marc – Emanda/Ecaho) bred by Michałów Stud and owned by Stephanie Boviens, placed third in the Geldings Championship. 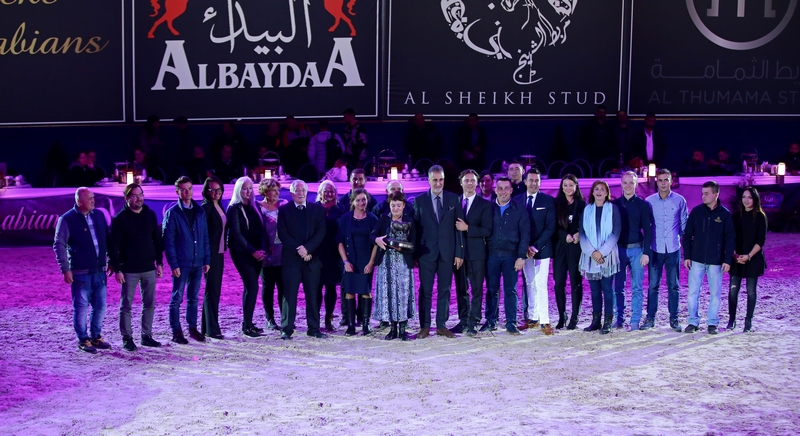 The pace was steadily made by Janów's SADYBA  (Dostatok - Sabatina/Ganges), ridden by her trainer S. Vasyutov. In the home straight it appeared that her win is unthreatened, but in the final meters she was outran by SABELLA.

Bred by J. Eng filly is owned by Ostrobrzeg Stud. She is trained by A. Wyrzyk and was ridden by M. Abik. Congratulations!

According to bidders' expectations DAHRA (Mared Al Sahra - Djaima/Nonius) didn't have any problems with outrunning the competition, winning easily by 4 lengths.  HELIA was second, beating ORLICA.

The winning horse and breeder, Mr. Z. Górski, were decorated by the President K. Poszepczyński.
Apart from PAHBA cup, Mr. Górski also received the "Racing Breeder of The Year 2018" award, with a prize of mare ARWA's  portrait painted by S. Iłenda.

Our colleague was distincted because of last year's Arwa's and Dragon's achievements. Congratulations!
>>> link

On the 7th and 8th of September in Michałowice near Cracow for the 4th time the Cracow Arabian Horse Show (ECAHO C-Int.) took place. Many guest exhibitors from abroad and even more local spectators were seen in a Szary Riding Club. Before halter classes, we could also cheer arabian horses under the saddle.


Only a class (without a championship formula) was conducted. The highest score went to KORAB (Pegasus - Karbala), a pretty successful riding horse as well. The second place, thanks to a high move score, was taken by WILTON (El Gazal - Wołogda).


The class was sponsored by Polish Association of Arabian Horse Breeders. The unanimous decision of the judges placed first the filly AMARANDA RA (Morion - Alina PS), who took the audience’s heart with a tremendous move.


7 horses were shown. The score of 91,10 was enough for KOLORADO PRINCE (RFI Farid - Karbona) to win the class. PETRUS PA (Ekstern - Piwonia) placed just behind him, but in the championship he had to exchange places with third in the class PASSAR (Atius O - Perkilla).


As usual, more fillies than colts were entered and the class has been divided into two groups. In the first of them ELMONA (Medalion - El Medisa) placed first, while PRASADA PA (Empire - Palatina) took second place. The win in the group B was for KHALIDA PA (EKS Alihandro - Kalahari) who beat EPIRA OF SINUS (Pomian - Etira). The results of the championship confirmed the judges’ decissions from the class:


The class of 2-3 years old fillies, as the one of female yearlings, was divided into two groups. In the group A the highest score went to NAILAH SW (Abha Qatar - JV Nerina). The fillies from group B scored higher. WAN DIAMENA (Ascott DD - Warejka) won it over EL ELLA (El Omari - Edrella). The comparison in the championship turned out to be in favor to Nailah SW.


Both 4-6 years old and 7 years and older classes were taken by Michałów-bred mares. 4 years old WIEŻA CZARÓW (Vitorio TO - Wieża Marzeń), scored the highest with an impressive 5x20 for movement, winning the class to H PEPA H (H Angelo H - Pepesza). ESTERNA (Ekstern - Escuela) outscored EMIRIONA (Grafik - Emmona) among the oldest mares, but in the championship the order has changed and was established as follows: 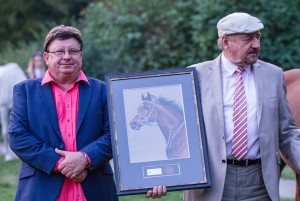 The new Polish champions are Maria Landau and VIP KOSSACK (Marwan I - Vydumka/Madiar) bred by The Kossack Stud and owned by B. Dzikowska. Silver medal went to Ryszard Zieliński and his own MIRYN (FS Bengali - Myrna/Fawor) bred by A. Jopek, while bronze - to Piotr Nitka and MOGADIUSZ (Echo Ofira - Mukata Fata/KA Czubuthan), bred and owned by Janusz Ryżkowski. Congratulations!

During the event the representative of our Association, Mr. J. Ryżkowski, proffered the Endurance Breeder of The Year 2018 Award to Mr. A. Nicpoń, for the achievements of EL MAHDI (Fedain - El Madżilis/Piaff). The prize was an El Mahdi's portrait painted by S. Iłenda.

Arabian Race Day: great results of AKF Poland and a couple of surprises

Pacemaking strategies played a crucial role also in youngsters’ Białka Stakes. Slow pace made by DRUG’S WIKTORIA (Drug - Waikiki/Dormane) let her stablemate and a big outsider TABARAK’S ELVIRA (Tabarak - Elea/Dormane), to give a firebolt finish and outspeed the favorites.

Another filly surprised the bidders in Sabelina Stakes. The odds were biggest for last year’s Oaks winner SWEET DREAM (Murhib - Soleil Kossack/Marwan I). Unexpectedly SPECIAL ‘OA’ (Murhib - Sadjella/Djebbel) was powerful enough to pick up a home straight fight with her and beat her by a neck in the finish line.

Between 16th and 18th of August The Al Khalediah European Arabian Horse Festival took place for the sixth time straight. The festival combines two events: ECAHO-A show and Arabian Race Day at the Służewiec Racetrack. Both of them become more and more popular among the exhibitors.

There were 16 fillies in the ring. Group A was won by FK GHALYAH (Fayad Alfayyad – Panonia), while group B – by D SHAMKHAH (Fa El Rasheem – FT Shaella). Third places in both groups were takien by Polish horses:  EL FARIDA (RFI Farid – Esmeta) bred and owned by A. Najmowicz and GOYA (Wadee Al Shaqab – Giness) bred and owned by W. Bąk. But the championship was completely owned by UAE fillies. It is worth to mention that first two places were taken by full sisters!

That class was also divided into two groups, but only 9 colts have been shown. One more time Dubai Arabian Horse Stud’s Fa El Rasheem offspring turned out to be the best both in the class and the championship. Białka and Janów champion colt STAR FARID (RFI Farid – EKS Star of Africa) placed second in the class and then lost the bronze by a small margin of judges’ points.

The 2 years old fillies class turned out to be lucky for Polish breeding. In group A an outstanding performance gave PAPROTNIA (Elgast – Paeksa) the first place. In group B PROTEKCJA (Ekstern – Pentra) unexpectedly won over renowned ENCARINA (Ascot DD – Enerina). In the class of 3 years old fillies – group B the first place went to PARANTELLA (Kahil Al Shaqab – Palanga), while third – to TACJANA (Ascot DD – Tartina).

In the first group of 7 years and older mares this year’s national champion WIEŻA MOCY (QR Marc – Wieża Marzeń) was shown, but ultimately placed second behind JV NERINA (Kadar’s Echoo – Niimah). In the group B mentioned before Best in Show prize winner EKSPULSJA (Gazal Al Shaqab – Elandra) was a competition only for herself, winning with the score of 93,75. PSYCHE KREUZA (Ekstern – Pallas Atena), with four „twenties” for movement, placed just behind her.

Ultimately, all of the championhip Top 5 turned out to be Polish-bred:

The class of 4-6 years olds was won by CALATEON (Vitorio TO – Calatea), followed by EMPOWER (WH Justice – Eksterna). The seven years and older class brought us the thrill of current World Senior Champion Stallion performance. EQUATOR (QR Marc – Ekliptyka) didn’t let down the audience and surely, with a margin of 1,5 points, three „20” for type and four „20” for movement, won the class and then (unanimously) the championship. 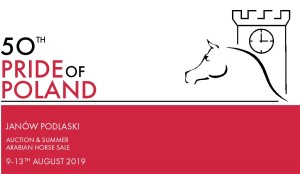 The judges were pretty busy, as 116 horses were entried, and 103 of them appeared in the show ring. This year, for the first time ever, there were also yearlings among them.

On Friday we started with male classes. The first group of yearling colts was taken by storm by RFI Farid sons, bred and owned by W. Parczewski – the first place was claimed by current Białka yearling champion STAR FARID (out of EKS Star Africa/Marwan Al Shaqab) and second by WOLARE (out of Wieża Marii/El Omari). The other group was won by Michałów’s POINTER (Sahm El Arab – Palanga/Ekstern).

Pomian then confirmed his value as a sire – next day the first class of yearling fillies was won by his daughter APLIA (od Anima/Ekstern), who slightly overtook her studmate BASILIA. Both fillies are bred and owned by Janów Podlaski State Stud. In the second group of yearling fillies the first place went, by the other hand, to Michałów State Stud. The highest score was obtained by their FLORISSIMA (Sahm El Arab – Forgissima/Vitorio TO). AMIRATA (EKS Alihandro – Alhasa/Ganges) from Janów Podlaski finished second.

There were also two groups of two years old fillies. In the first one, without any surprise, the highest score was received by Białka Junior Champion Filly ENCARINA (Ascot DD – Eneria/QR Marc) bred and owned by Janów Podlaski State Stud, while in the second – by Michałów’s EL BELISSIMA (Ascot DD – Ekliptyka/Ekstern). Just behind them placed PAPROTNIA (Elgast – Paeksa/Ekstern) bred and owned by L. Błaszczyk and PROTEKCJA (Ekstern – Pentra/Poganin) bred and owned by Michałów State Stud. It is worth to mention that both that El Belissima and Protekcja received even, very high scores  (93,33).

The first group of 4-6 years old fillies was conquered by Michałów’s ZIGI ZARA (Shanghai EA – Zigi Zana/QR Marc), who overtook Janów’s ATAKAMA (Empire – Atma/Ekstern). In the other one the first two places went to Kahil Al Shaqab’s daughters – Janów’s PROMETIDA (out of Panonia/Eukaliptus) and FUTURE (out of Fortycja/Pegasus), bred and owned by A. Wójtowicz.

For Sunday’s open championships every yearling groups’ top 3 and every other group’s top 2 were qualified. Below you can find the full results.

After the medal ceremonies there was nothing left but to choose the „Best in Show” and give all of the special prizes. Janów’s ENCARINA was chosen as „the best of the best”. Moreover, basing on classes’ scores, three horses claimed special prizes in four categories:

WAHO Challenge Trophy awarded to an Outstanding Representative of Polish Arabian Horse Breeding went to Janów’s PĘTLA – the dam of well-renowned stallion POGROM. BIGAMIA was chosen the Best Racehorse of the National Show. The prize for the best trainer went to Kamil Biernat, Gerald Kurtz was chosen the best handler, and Michałów State Stud claimed the best breeder award.

We would like to congratulate all of the successful breeders and owners, and particularly the members of our Association. What a great show it was!

Show jumpers Karolina Hernik and FENOMEN (bred by S. Redestowicz and owned by T. Hernik) placed 4th in Jumping Master 100 cms round and 7th in 105 cms round.

Congratulations to all the connections!

On the 13 th of July in Insmer Stud located in Ströhen, Germany the annual ECAHO-B International Show took place. We could admire a large group of either Polish-bred or Polish-owned horses in the show ring.

Despite winning 10+ years old mares class (91,42 points), bred by Michałów Stud and owned by Nina Suskevicova – Suweco Stud EMIRIONA finished the championship with no more than a special best movement prize. In the Senior Mares Championship we had also other Polish contenders, such as EBORA (the same breeder and owner as EMIRIONA); NAMIRAH KA, bred by Klarenbeek Arabians and owned by A. Janas-Naze; Hennesy Arabians’ Pepesza’s daughter H PEPA H owned by C. Gołaszewski; and HULINA bred by Białka Stud and owned by A. Janas-Naze-Blacklady Arabians.

Interesting performance was delivered by the only gelding in the show, 10 years old half-brother of Platinium World Champion Emandoria, EL EMANDO (by QR Marc). He received 91,33 points, including 3 x 20 for trot.

Big congratulations to all the breeders and owners!