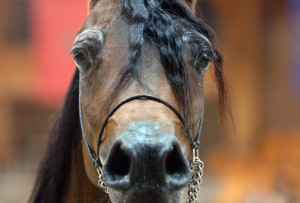 Yesterday Janów Podlaski Stud informed about the passing away of Pianissima (b. 2003, Gazal Al Shaqab - Pianosa/Eukaliptus), the highest decorated mare of Polish breeding and ownership, a double Polish National Champion and double European Triple Crown winner, US National Champion, Platinum World Champion and a champion from several Middle Eastern shows. History knows few equines that won every show they competed in. But Pianissima was that kind of horse. For breeders all over the world she will remain a legend and unsurpassed ideal. Her line will be continued at the home stud by her daughters.
>>> link

Conformation-type races for Arabian horses in the 2016 season

As racing training of Arabian horses is due to start soon, the PAHBA Board would like to inform that President Anna Stojanowska has received a letter from Totalizator Sportowy (the racing organzier), confirming the presence of conformation-type races in the 2016 racing plan.
>>> link

On September 12th, 2015, during the European Arabian Horse Sports Championships in Janów Podlaski a meeting of the PAHBA board was held in the stud’s office at 9:00 PM. The participants included:

The following agenda of the meeting was approved:

1. Approval of the agenda of the meeting.
2. A speech by Mrs. H. Sztuka on the participation in an educational contest.
3. Discussing the financial situation of the PAHBA.
4. The evaluation of the organization and carrying out of championships in Poland. Potential conclusions for organizers.
5. The stance of certain representatives of the PAHBA in the Polish Jockey Club in regard to the Board's resolutions and objectives of the breeding program.
6. A summary of launching the internet service (website).
7. Discussing matters regarding the PAHBA website and its further maintaining (history and achievements, translations, publishing current news). Cooperating with photographers for the publication of images.
8. An change of rules in the "Breeder of the Year" classification due to the cooperation agreement between ECAHO and AHO.
9. The organizing of a C-international show by PAHBA in 2016 for horses without titles.
10. Discussing the proposition of visiting studs in a given area, for example the Mazovia region, this autumn.
11. ARABY Magazine - the publication's current status.
12. Membership declaration - the applications of Mrs. Agnieszka Łępicka.
13. Other matters and motions.
The summary of the minutes from the Board meeting will be presented at a later date.
>>> link 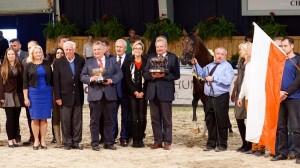 Last weekend was very successful for Polish breeders at the 33rd All Nations Cup in Aachen. Polish-bred and Polish-owned horses strongly marked their presence in the majority of the classes and as many as 14 horses qualified for the Sunday championships in the ECAHO affiliated categories and Futurity. This time all the medals went to Michałów Stud. The Polish National Anthem was heard thanks to Morion, who claimed the gold among the junior stallions, besting a strong favorite, Gallardo J. The silver in the senior stallions category went to his stablemate, Equator, whereas the bronze colored medal was awarded to Pustynia Kahila in the junior mare category. Horses bred and owned by private breeders also proudly represented the white and red colors – two of them were present in the championships: the year old Fuerte of Jan Dobrzyński and in the senior category – Psyche Keret from Chrcynno-Palace Stud. The crowning of the successful performances of Polish horses was Poland’s victory in both Trophies – the Nations Cup (for the 9th time) and Breeders Cup (for the 6th time). These victories gave our country a decisive leading position in the winners’ history of these two prestigious distinctions! Full show results can be found on the organizer’s website.

The film archive from the championships, classes and special award ceremonies. 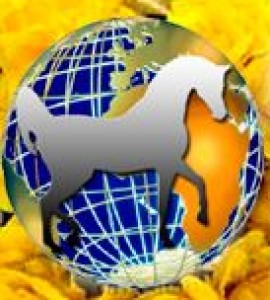 Tomorrow in Aachen the first European Title show of the season will take place – the 33rd All Nations Cup. The catalogue lists 35 horses from Poland – 12 from private studs and 23 from the state studs. There is a large group of breeders and enthusiasts of the Polish horse heading to Germany, so we are counting on a huge applause for our competitors.

The event will begin tomorrow with the German National Show (September 25-26th, with Marek Trela, Poland in the jury panel) and the international competitions will begin in the afternoon with the classes of the 2 and 3 year olds. Concurrent to the classes on the weekend there will also be an All Nations Cup in dressage and show jumping. Sunday will end with the championships and the awarding of two prestigious challenge trophies – the Nations Cup and the Breeders Cup, in which our country and our horses are favorites each year. For the first time also the best geldings will be awarded and – similarly to previous years – foals from last year’s breedings (Futurity, not affiliated with ECAHO).

An interesting new feature initiated by the owners of Albaydaa Stud from Egypt will be the Jackpot, with a purse of 14,000 Euro. Registered users (both those at the show and online, registered by their passport number) will be able to vote in two competitions: to select this year’s medalists of the seven consecutive All Nations Cup championships and their favorite judges. Those that correctly select the champions will divide among themselves 2,000 Euro per championship. The results of the public’s voting will not have an influence on the judges’ decision and will be published after the end of judging. Also right after the end of the show a list of 9 favorite judges will be announced, selected through the votes of registered users. This will be treated as a suggestion for organizers when putting together a jury panel in the future. This way the Organizing Committee wants to make the Aachen show even more attractive for the public, allowing them to take active part in planning the show in the upcoming years.

The registration of users and more information about the show, as well as the live broadcast available from Friday can be found on the organizer’s website: http://www.all-nations-cup.org/
>>> link 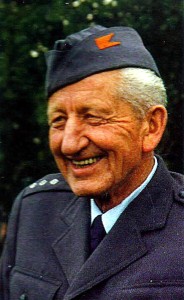 100 years ago another legend of Polish Arabian horse breeding was born - Andrzej Krzyształowicz, for many years the director of Janow Podlaski Stud. 17 years ago we followed him, together with Janow Podlaski's best horses, on his last journey...
>>> link 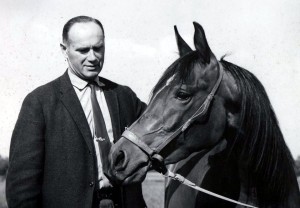 It is already 11 years since we said good bye to one of the greatest breeders in Polish history - Mr Ignacy Jaworowski, Honorary President of the Polish Arabian Horse Breeders Association. He was the first director of Michałów Stud and it is him who created all the pillars for the success of Michałów’s horses.
>>> link

This past weekend the 12th European Arabian Horse Sports Championships were held at Janów Podlaski. This year the competition had an open formula, which had a positive impact on the increase of the number of participating pairs. There were even teams from the Middle East, from Saudi Arabia and the United Arab Emirates, among others. It is impossible not to notice that the popularity of sport competitions atop Arabian horses and the event itself now regularly taking place in Janów is growing, which is of course beneficial for the promotion of the Polish Arabian horse under saddle, especially since the Polish competitors’ were rather successful at this year’s event.

In a competition with highly decorated horses from abroad (among them the Danish Zonyx) Echo Apollo, bred by Chrcynno-Palace and owned by his rider, Kaja Dembińska, placed second in the dressage finals (FEI Prix St. Georges Team Young Riders, Level M).

In the Classic Pleasure C All Round (class 10) classification the famous dressage horse Zonyx yielded before Janów’s Sabat under Natalia Ciman, who bested 25 other pairs! Sabat also became the winner of the qualifiers and finals in the Polish Historic Costume class. Although this competition is not part of the official ECAHO classification, we should acknowledge the improving quality of the presented costumes of Polish contestants. A novelty were original attires and Arabian tack presented for the first time in Poland by pairs from the Middle East in the Native Costume category.

Fourth in the Dressage C All Round (class 8) behind pairs from Sweden, France and Denmark placed Edinet, owned by BT Damis under Agnieszka Romszycka. The Trail (class 9) was won by El Moro, bred by M Arabians and owned by Layan Arabians, Austria. El Moro also triumphed in the Ladies Side Saddle (class 19) and Trail (class 21). A feast for the eyes was the rivalry in the 400 m Sprint, won by the Polish Ekier under Danuta Konończuk. The race consisted of 10 pairs. Ekier also won the finals of the Ladies Side Saddle (class 36), M level. An interesting competition was Pole Bending (class 30) won by the pair from Michałów – Gardeja and Kinga Klinicka. Also in the show jumping competition, so rare among Arabian horses, new talents were revealed. In the Show Jumping C All Round up to 90 cm (class 13) triumphed Alvorada owned by Dariusz Kowalski under Aleksandra Kowalska, whereas in the up to 100 cm (class 24) and the finals up to 110 cm (class 37) – Estra, owned by Anna Madrak under Agata Madrak. Full show results can be found on the main organizer’s website – Janów Podlaski Stud. Our fanpage on Facebook feature a gallery of participants and photographers present at Janów this year.

The PAHBA, as a co-organizer of the European Championships, would like to cordially thank its members for the tremendous work and involvement in the organization, efficient carrying out and visual impression of the Janów event, which evidently increase the popularity of Polish Arabian horses used under saddle with each year.
>>> link 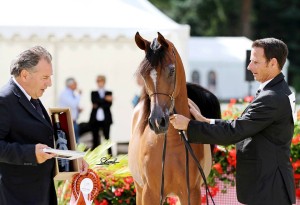 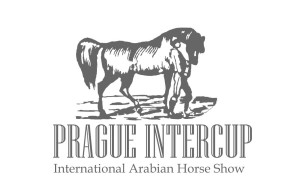 Last weekend Prague held the national (C) Arabian horse show and two international ones – the Prague Intercup (B) and the Porsche European Cup (honoring the best horses of European breeding and ownership). In all of them Polish-owned and Polish-bred horses made their presence known. In the C-national show chosen as Junior Champion was Ariona bred by Stanred Arabians, the Reserve Champion in this category was Cerlita bred by A. Piwowarski. In the senior mares category the gold medal went to Wiwina bred by L. Sikora and the bronze to Emfi, bred by R. Żurawski. Among the senior stallions the gold was awarded to Psyche Amon bred by Chrcynno-Palace Stud and the silver to Edeck bred by M. Zalinski.

Winners in the B international show included:

In the prestigious Porsche European Cup as many as 7 medals and 5 Top Five titles went to Polish state studs and private breeders.

The detailed results can be found here.
>>> link